(MARCH 24, 2021) – On Wednesday, U.S. Senators Jon Tester (D-MT) and Chuck Grassley (R-IA) introduced a bill to require each U.S. meat processing facility that slaughters over 125,000 head of cattle each year to purchase fifty percent of their weekly volume of beef slaughter on the open or ‘spot’ market.

“We commend Senator Grassley for continuing to champion legislation that seeks to strengthen the U.S. cattle producer’s bottom line.

“This legislation, the ’50-14’ or spot market bill, follows legislation already supported by USCA, the Cattle Market Transparency Act of 2021 introduced by Senator Deb Fischer of Nebraska. The two bills, while different, both focus on necessary changes and enhancements to the cattle marketplace. USCA supports both pieces of legislation and will be working with both offices on paths forward.

“As Congress looks to the reauthorization of the Livestock Mandatory Reporting Program (LMR) prior to its expiration on September 30, 2021, USCA appreciates any and all efforts to reform the program.  LMR must be better utilized as a mechanism for accurate and transparent reporting in order to advance price discovery and shore up the fundamentals of the CME cattle futures contracts.

“USCA looks forward to working with members of the Senate and House Agriculture Committees to realign the cattle marketplace with its true fundamentals and level the playing field in producer-packer relationships.”

Common arguments against efforts to restore transparency in the cattle marketplace and our response:

1.) We don’t need the government meddling in our free markets, or another government mandate weighing on us.

Price reporting in and of itself is a government mandate. And because government mandates restrict our access to selected data, we need to find ways to work around the confidentially clause that may curtail price reporting in any of the USDA reporting regions. If we could remove the confidentiality clause from the Livestock Mandatory Reporting program, this legislation would not be needed.

2.) Producers shouldn’t be forced to give up their formula agreements or change the way they do business.

The large corporate feeders are the only producers benefiting from the current system. This legislation would shift market incentives away from being ‘bigger’, and toward being ‘better’. The result would be a more competitive, efficient overall industry with participants who are rewarded for efficiently producing a high-quality product. Under this bill, Alternative Marketing Arrangements (AMAs), would still be allowed.

We cannot allow the independent producer to go bankrupt in favor of supporting the large, corporate conglomerates. This year’s market disruption and food shortages served as a stark demonstration of the critical importance of diverse cattle markets. When packing facilities began slowing production, the first ties they cut were those with independent producers. Corporate feeders went largely unharmed, due to their contract agreements, while independent producers were left with over-finished cattle and few, if any, marketing alternatives. 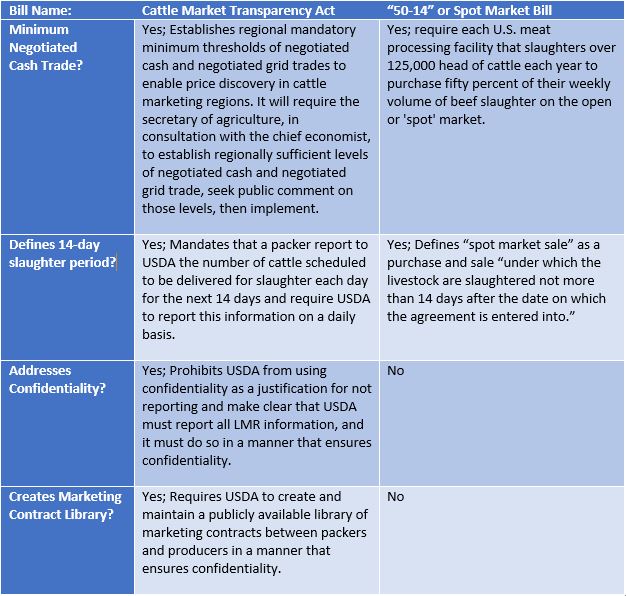 Negotiated Cash Trade Through the Years and by Region 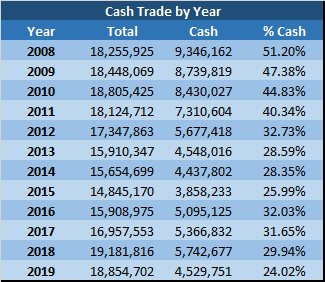 Note: this does not include packer-owned cattle. 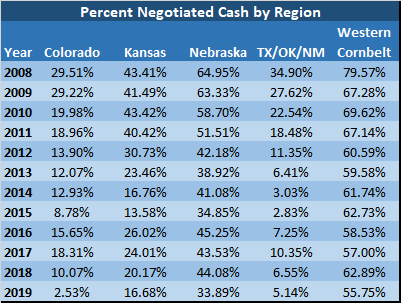 From the archives: On Friday May 8, 2020, USCA hosted Corbitt Wall of DV Auction, USCA Vice President Justin Tupper, and USCA Director of Policy & Outreach Lia Biondo to discuss the proposal to require a minimum percentage of cash negotiated cattle to be bought by each U.S. meat processing facility that is large enough to report to USDA’s Agricultural Marketing Service (AMS).