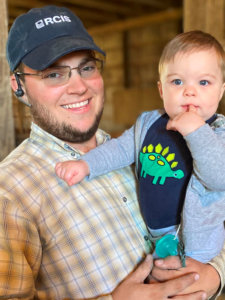 (JUNE 13, 2021) – Three new directors from across the country have been selected to join the ranks of existing United States Cattlemen’s Association (USCA) leadership. Spanning from the Mid-Atlantic to the Pacific Northwest (and everywhere in-between!), USCA’s dedicated leadership connects us to our producer membership and drives our association forward.

The USCA membership is structured into regions that, builds  our grassroots strength and connects us to local priorities. From there, we can use these regional breakouts  to mobilize our membership and produce focused results on Capitol Hill. USCA’s regional directors serve as the conduit to these regions, representing members in their states and providing leadership, connections, and guidance.

Region XIII, representing Kentucky, Indiana and Michigan, welcomes Samuel Ebenkamp from Otwell, Indiana. Joining USCA because, “I believe USCA is the only organization truly fighting for the future of the independent cattle producer, and a future industry for my son to raise cattle as well”, he has taken his role as a director with purpose.

A Purdue graduate, Ebenkamp didn’t grow up on a farm and was introduced to the industry from his in-law’s independent farrow-finish hog operation. Learning what was happening to independent producers in the pork industry and seeing that they no longer have a voice, he has taken that perspective to work—stepping up to the plate in leadership.

Ebenkamp is a first-generation farmer and cattleman, but his wife Lauren, an ICU nurse, is at least 6th generation on her family’s farm. Together, they now run a registered Angus operation, primarily raising calves all the way to finish, selling grade and yield to a local independent processor. They also develop and retain their own heifers and raise bulls for sale.

To start raising cattle, Ebenkamp partnered with an older gentleman that is a 3rd generation Angus breeder and has been raising Angus cattle on their farm for 75 years. Ebenkamp credits his mentor with “teaching him everything he knows” about raising cattle, imparting his knowledge and experience to help guide their operation.

After joining USCA, he became involved in a couple of committees and enjoyed seeing the inside perspective of what was being accomplished. Feeling that he could offer additional perspective that could be of value to the organization, he applied for the director position. He found that raising cattle through the tumultuous year of 2020 shaped many of his goals as a director, as he said, “First, I believe it’s paramount to continue the fight for more transparency in the cattle market. My second main goal is strengthening and expanding independent beef processors, to provide more options for both producers and consumers.”

His passion lies in representing independent producers like himself and producers in areas of the country at a disadvantage to securing bids due to lack of competition. As Ebenkamp stated, “If I want to be honest and tell my 17-month-old son, ‘You can be a cattle producer’, then it is up to me to be part of the fight and help keep cattle producers independent. I believe this is the only organization willing to do that.”